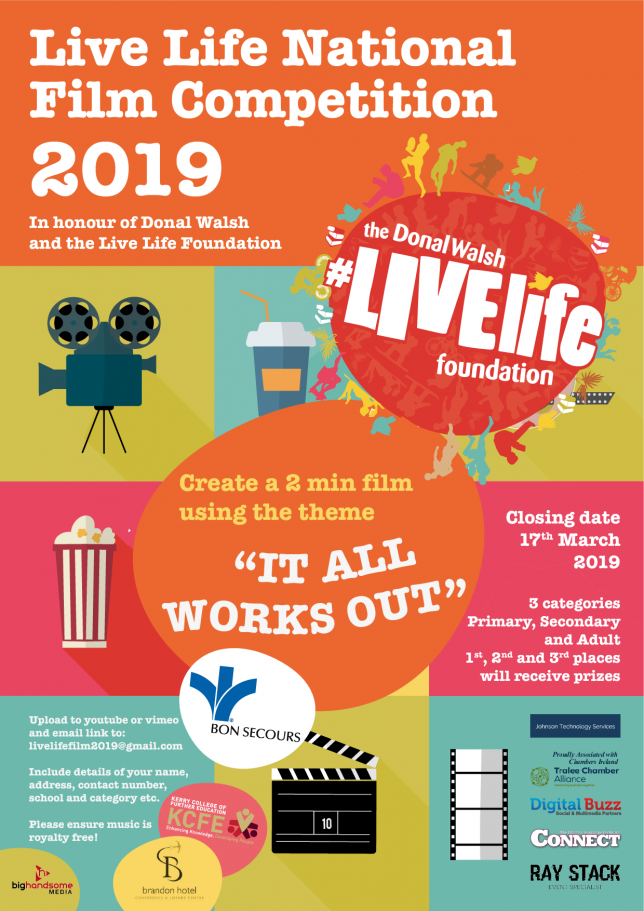 “All Works Out” The Livelife National Film Competition

The National Live Life Film Competition for 2019 was officially launched on Thursday 10th January 2019 in Kerry College of Further Education.  This is the 6th year of this hugely popular competition in memory of Tralee teenager Donal Walsh. The Competition aims to continue to spread Donal’s positive message as he began an anti-suicide conversation before he lost his cancer battle in 2013. Groups and individuals of all ages and abilities are invited to submit a two min film clip on a theme linked to positive thinking/living. This year’s theme is “It All Works Out!”

The fully-sponsored competition, now in its 6th year, culminates in the highly acclaimed annual awards ceremony attended by over 800 people with celebrity guests and bands. This year only the primary school awards will be presented at the Live Life Awards Ceremony. A new element is being introduced for the secondary school and adult entries as the shortlisted and winning entries will be screened on the big cinema screens at a separate Award Ceremony.

The  competition is fully sponsored and supported by local businesses and organisations and the event manager for the competition, Mary Lucey Principal of Kerry College of Further Education (KCFE) stated that without this ongoing sponsorship and support, the competition would not continue and could not have grown from strength to strength as it has. This year will also see the assistance from Kerry College of Further Education (KCFE) teachers and student groups in the organisation and management of the competition.  Well known film and creative experts will judge the competition including Maurice Galway, Director of Dingle International Film Festival and Dingle Animation, Award Winning Producer Lisa Fingleton, Award Winning Creative Designer Paul Ruane; TV Producer Brian Hurley; Award Winning Author and Screenwriter Ailbhe Keogan; Actress, Writer and Producer Maeve McGrath and more.

As many people as possible are encouraged to submit an entry,  a phone, a camera, an ipad whatever can be used that that will work.  What this film competition is about is capturing life and living life.  What is important is that people have a great time making the films and realise live is for living, which was always Donal’s  message. Films must be 2 mins only uploaded to youtube/vimeo and emailed to livelifefilm2019@gmail.com. Closing date for entries is 17th March 2019.

Mary Lucey
Click here to watch Highlights from our 2016 event.
Some Pictures from 2018 event:

Some Pictures from 2015 event: