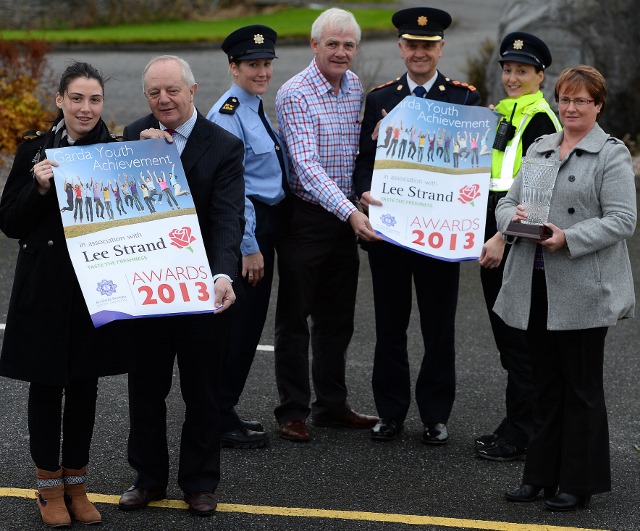 The search is on for Kerry’s Youth

The official launch of the Lee Strand/Kerry Garda Youth Achievement Awards 2013 was held today, Monday, November 11th, 2013 at Lee Strand, Ballymullen, Tralee, Co. Kerry. The awards scheme which first commenced in 1998 is designed to acknowledge the volunteering endeavours of young people from Kerry between the ages of 14 years and 19 years. The winners will be announced at a celebratory function in the Ballyroe Heights Hotel, Tralee on Friday, January 24th, 2014. Awards will be presented for the Overall Winner, Certificates of Distinction, Certificates of Merit, a Voluntary Group Award and a School Award.

To recognise the outstanding achievements of Donal Walsh, Lee Strand and the Kerry Garda have named the Overall Winner’s award the ‘Donal Walsh Livelife Award’. Donal was no stranger to the Lee Strand/Kerry Garda Youth Achievement Awards and had received a Distinction Award 2010 and a Merit Award 2012.

Speaking at the launch Chief Superintendent Pat Sullivan said that he was delighted to be able to announce details of the 2013 awards. He emphasised the importance of recognising and supporting young people who make the effort to help others in their community. He asked the Kerry public to look around their area and nominate any young person who has volunteered in any capacity over the past 12 months. He also thanked Lee Strand for the steadfast support of the Garda Youth Achievement Awards over the past 15 years and stated that the success of the awards scheme was due in no small way to that continued support.

John O’Sullivan, General Manager, Lee Strand stated “Lee Strand has a strong commitment to supporting initiatives within the local community and we are delighted once again to support the Kerry Garda Youth Achievement Awards. The awards provide a great opportunity to celebrate and recognise the voluntary efforts of the young people of Kerry, who have made a positive impact within their local community.”

The closing date for receipt of nominations is Wednesday, December 18th, 2013. Any member of the public can nominate a young person whom they feel has made a contribution to their local area. Nominations are accepted from individuals, community and voluntary groups, schools and youth clubs/organisation. The winners will be selected by a panel of five judges who are community volunteers from around the county under the chairmanship of Chief Superintendent Pat Sullivan, An Garda Siochana. Nominations are available from any Garda Station in Kerry; K.D.Y.S. Office in Tralee, Killarney and Listowel or by contacting the Juvenile Liaison Office at Tralee Garda Station on 066 7102311.